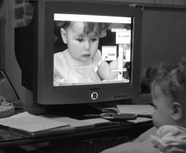 The current euphoria over virtual visitation is illustrated by an online article entitled “Virtual Visitation Helps Maintain Strong Parent-Child Relationships”. Unfortunately, this article, which is a press release written by a family law firm soliciting business, cites no scientific evidence to support its position. In truth, virtual visitations do NOT help maintain strong parent-child relationships. Family law is plagued by unexamined fads (like Judith S. Wallerstein’s wholly discredited single, primary parent theory)–and families across the country continue to be destroyed by these dysfunctional notions about human nature. Virtual visitations stand to be the next great destroyer of the American family unless its use is reserved for cases in which face-to-face visitation is impossible.

Beneath these obvious misuses of virtual visitation lies a deeper, far more subversive problem. This problem was first identified by Marshall McLuhan in 1964 and is discussed in an article on this site entitled “Is ‘Virtual Visitation’ Visitation?”.

Until a computer can simulate the feeling of a hug or a kiss goodnight, or replace a well-brushed baby tooth that is put under a child’s pillow, by definition, “virtual visitation” is not visitation. Ask any child.

Click here to read more on the subject in the article “Is ‘Virtual Visitation’ Visitation?”.